Last week I bought some great barkcloth at the Royal Oak Flea Market. I had seen this pile of fabric the last few weeks and finally stopped to look at it. 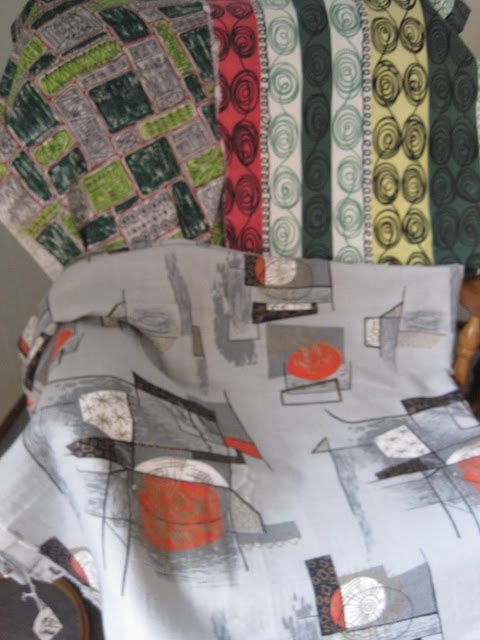 The gray with orange red and black was uncut yardage. 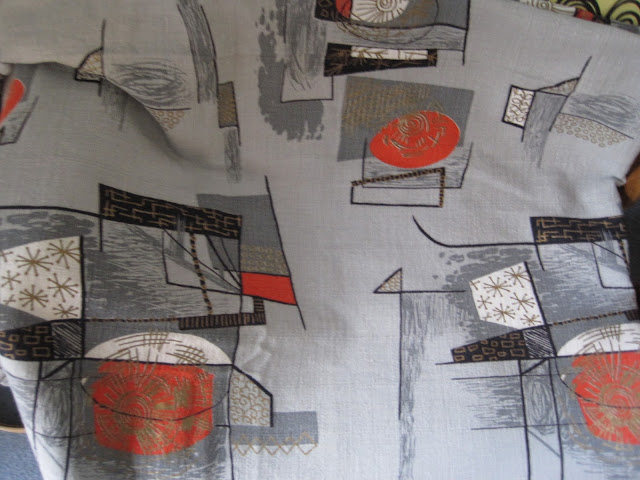 The green and gray on the left was also uncut yardage. The red, white and green swirl was part of a drapery panel. 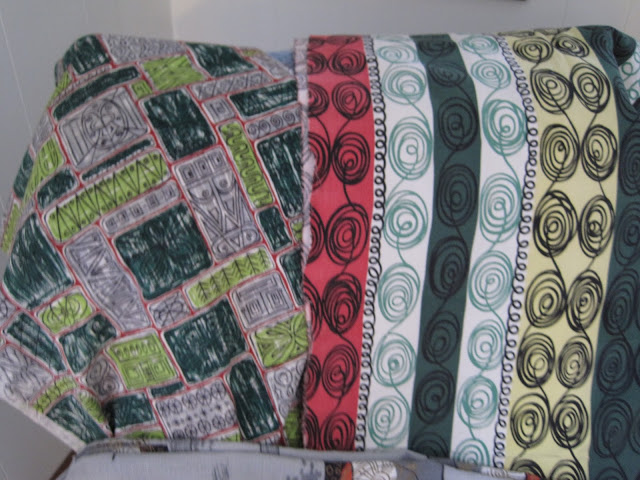 Now I have to decide how to use this great fabric! I am wondering about using it for upholstering or for pillows or for window treatments...
Posted by Nancy A. Bekofske at 8:59:00 AM No comments: 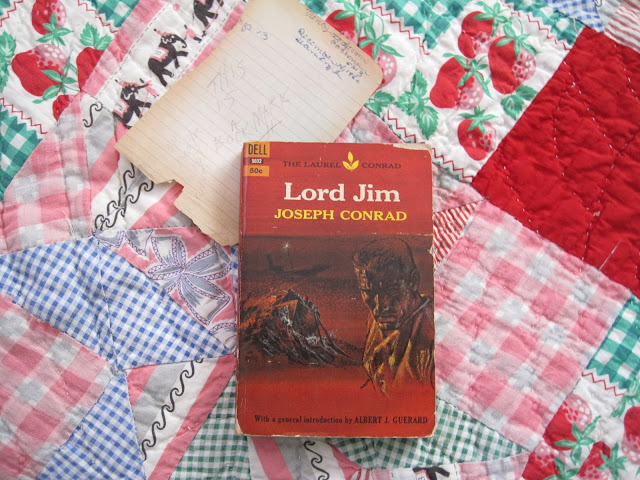 I was looking over my old books when I came across this paperback version of Lord Jim, which I purchased in 1966 while a freshman in high school.

Why in the world did a 14 year-old-girl purchase, as one of her first book buys ever, Lord Jim by Joseph Conrad?

Because as a girl she had loved the Classics Illustrated Comic book story of Lord Jim. 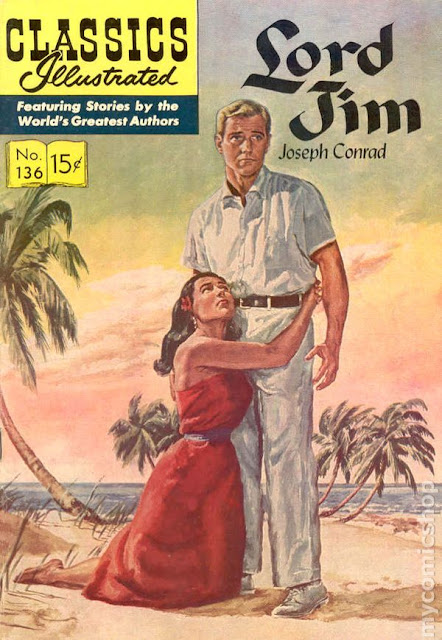 The paperback's red tinted art reflects the high emotion of the scene depicted: the lone light of the ship before the crew loses sight of the sinking ship, the single life boat fleeing from the Patna with the cowardly crew, and Jim glowering and defensive about the shame of having jumped ship.

The comic book shows a youthful Jim in clean white apparel, his blond hair nearly white against his tanned face. He stand tall and proud against a pastel tinted sky, a native woman clinging to his legs.

The paperback cover illustrates Jim's moment of shame; the comic his moment of honor and expiation, leaving his beloved Jewel to face the consequences of his actions.

The girl me found Jim heroic and tragic. As children we imagine wondrous achievements of glory and righteousness. Catching the flag before it dips to the ground, settling the murderous intruder with music that calms the wild beast. Jim has kept that childlike dream of heroism and high ideals into his twenties.


"He saw himself saving people from sinking ships, cutting away masts in a hurricane, swimming through a surf...When all men flinched, then--he felt sure--he alone would know how to deal with the spurious menace of wind and seas."

Then at age 23 Jim's opportunity comes and he fails to live up to his own high self-image.

The plot line goes like this: Jim ships aboard the Patna, whose jaded crew he deems far beneath his parsonage-rooted high values. "I loathed them. I hated them," Jim tells Marlowe, the narrator of the story.

The Patna strikes something while in the ocean, likely a floating hulk. Water is filling the holds. The crew in a panic abandons ship, without thinking of the lives of the 800 Muslim pilgrims on board, for there are not enough life boats. Jim will have nothing to do with this, intending to stay with the ship.  The captain and crew are shouting "jump, jump" and Jim's primal brain opts for survival--- and Jim jumps. He hates himself from that moment.

The ship does not sink. Jim alone faces trial while the others run away. The entire crew loses their credentials.

Marlowe was in the courtroom. Afterward, a man in the street comments on 'that yellow cur', a dog, but Jim assumes the comment was for his benefit and he turn on Marlowe who he believes uttered the words. Marlowe ends up listening to Jim's story, and finds him employment with Stein. Stein understands at once: "He is romantic."

"There were his fine sensibilities, his fine feelings, his fine longings--a sort of sublimated, idealized selfishness. He was--if you allow me to say so--very fine; very fine--and very unfortunate.A little coarser nature would not have borne the strain; it would have had to come to terms with itself...a still coarser one would have remained invulnerably ignorant and completely uninteresting."

Jim rejoices in being given a clean slate, and performs his job remarkably well, becoming Stein's protege and surrogate son. But the moment someone recognizes him, Jim in shame runs away deeper into the Malaysian islands.

Marlowe finds Jim employment where he will never be recognized, on Patusan, an island in the remote district of a native-ruled state. There are  three  factions warring over trade, and only one other white man on the entire island, Cornelius, who Jim is to replace. Cornelius is not fine, and he despises Jim.

Jim has been given the opportunity to blossom into the kind of man he always knew he was, and wanted to be. He helps the native ruler Doramin fend off the Rajah and becomes a local hero. The natives respect him, telling tales of his magical powers, and call him Tuan Jim, or Lord Jim. Jim assumes responsibility for their well being and considers them his people. It is a microcosm of Colonialism in its most idealized form. Jim realizes that this adulation is false, that there is another truth, the real truth, of his fallen nature and cowardice.

"He was like a figure set up on a pedestal."

Several years later, Marlowe visits Jim. He tries to convince Jim not to hide from the world, exclaiming, "that it is not I or the world who remember...It is you---you, who remember."  Jim no longer deems himself worthy of life within the white world. He believes he has found his calling and place.

A Buccaneer named Brown comes to the island seeking food. The natives capture Brown and want to kill them. Jim understands that good men can do bad deeds and who is he to condemn anyone? He tells Doramin that the pirates were evil-dowers, but their destiny had been evil, too. He convinces the natives to let the white men return to their ship with food.


"He was ready to answer with his life for any harm that should come to them."

Cornelius convinces the pirates plan to take over the trade themselves. On their way to their ship, the pirates attack and kill Doramin's son. Jim realizes that he has brought about his own ruin. Jim presents himself to Doramin who shoots Jim through the chest.

Marlowe calls Jim's act exalted egoism, tearing himself from the arms of the women who loves him to "celebrate his pitiless wedding with a shadowy ideal of conduct."

I have read the novel a number of times. I no longer feel kindred to Jim's high romantic idealism. I enjoy the novel on other levels: Conrad's gorgeous writing, the psychological study of human nature.

We know today bout how the human brain works on two levels: the primal brain that judges flight or fight, and the higher brain that logically looks at the consequences of our actions. Jim's jump was primal. His presentation to Doramin was a conscious act of accepting justice---A rare virtue in any time.

We are a society in which we get all we can get, where shirking responsibility is considered savvy. We have dropped the prayer of confession from church services because we want religion to be personally uplifting and the idea of all being sinners is a downer. Personal responsibility  has become passe'.

I expect Romanticism is completely dead.

As perhaps it was even when Conrad wrote this novel. Marlowe and Stein both see Jim as possessed with a great egoism. No one understands what drives Jim into hiding, why he cannot forgive himself, and why he does not realize that his jump means little to others. We can think about celebrities and politicians who committed grave personal errors, which were soon forgot or forgiven by the public, and whose careers went on.

I recall hearing that when we are young we think everyone is watching  us; when we are middle aged we no longer care that people are watching us; and when we are old we understand that no one was watching us in the first place. Jim represents youth with all its anxiety, its quest for identify, and need for approval. As a child I loved the tragedy. As a girl the high ideals. And as old age advances, I realize that Conrad has caught the high idealism of self-conscious youth in the character of Jim. And that expiation is a personal matter that no one else will ever understand.

I returned to the Royal Oak, MI flea market. I was able to get the two quilts I really went back for. When I made an offer, the seller said no, he had a lady coming back for the quilts. I said, that lady is me! Instead of three quilts I bought two.

The first quilt was surely not going to sell easily, because its bright yellow fabric was a turn-off to many. Last week I heard people deriding the yellow in the quilt. But it is in great condition, no fading, likely never washed. At 100"by 79" it was the largest of the quilts there. 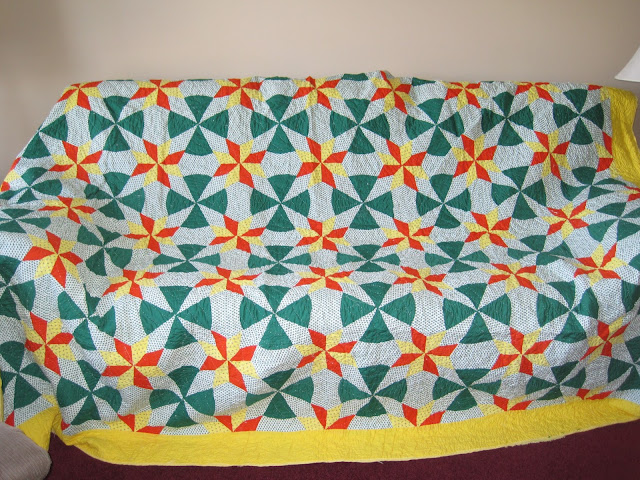 The piecing is quite good, but the hand quilting is the large stitches with coarse thread seen in the other quilts. The quilter left long tails of the thread uncut. 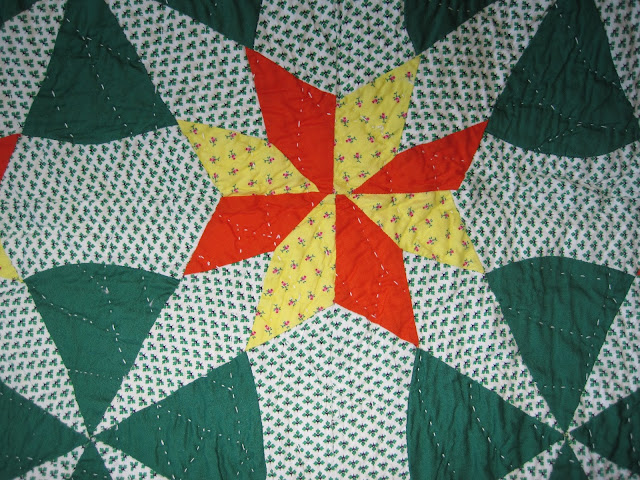 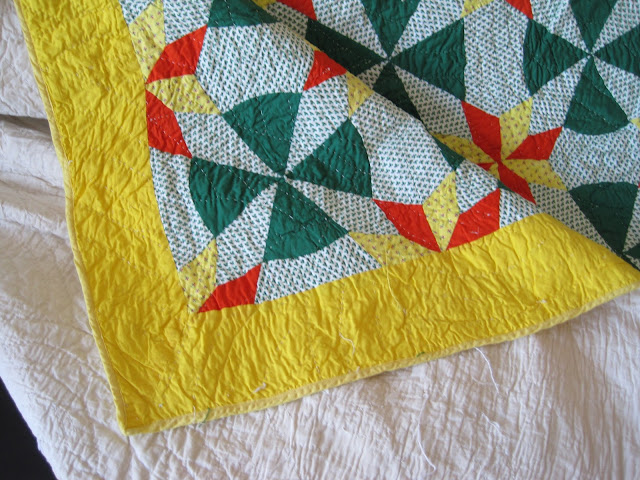 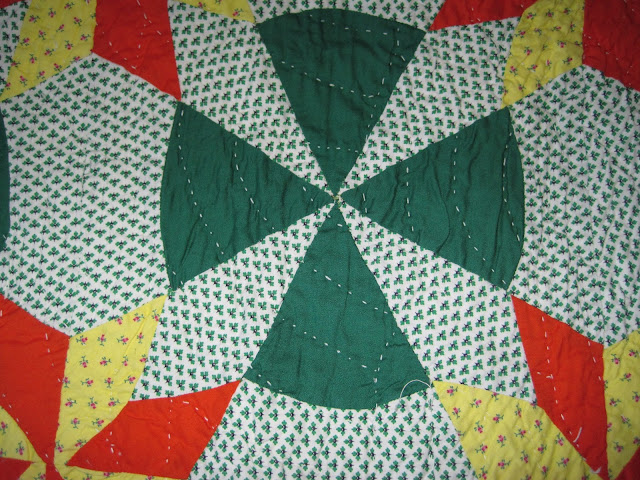 The yellow calico in the stars is different from the yellow border fabric. The quilt maker bought all new fabric for this quilt, with only the five fabrics used in the top. It is backed by a coarse muslin.

The other quilt I wanted was a simple whole cloth quilt in a red calico, with two side borders in a charming bells on ribbon print. 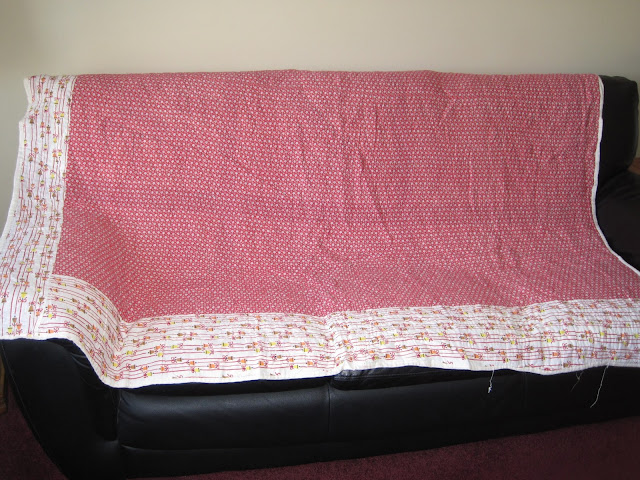 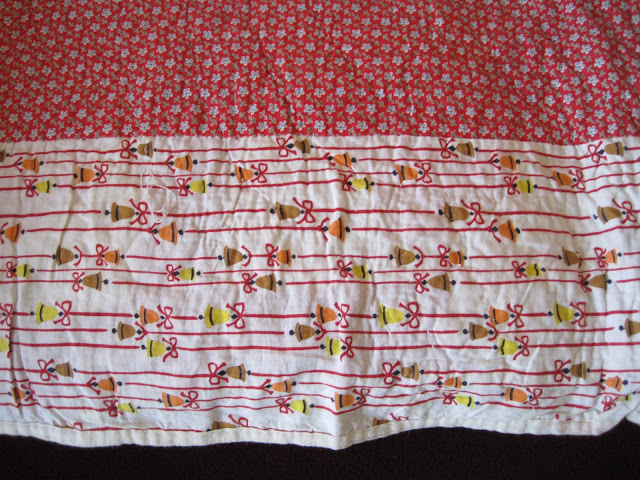 After I got this home and looked at what repairs it needed, I found it had a surprise. The batting was an older quilt! I could see the bound edge through a gap where the quilt binding was undone.An older red and white print could be seen. 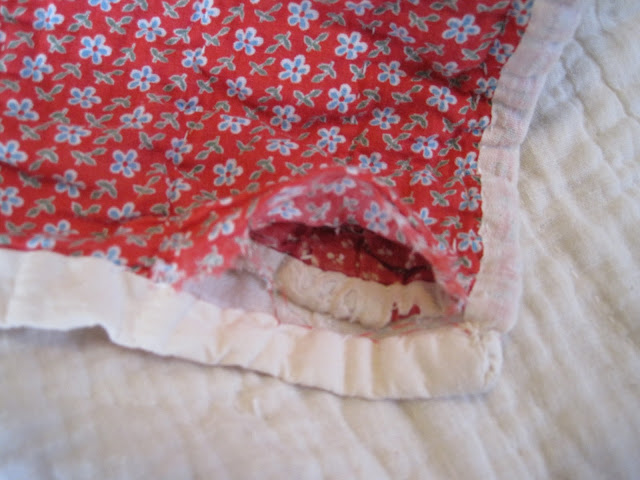 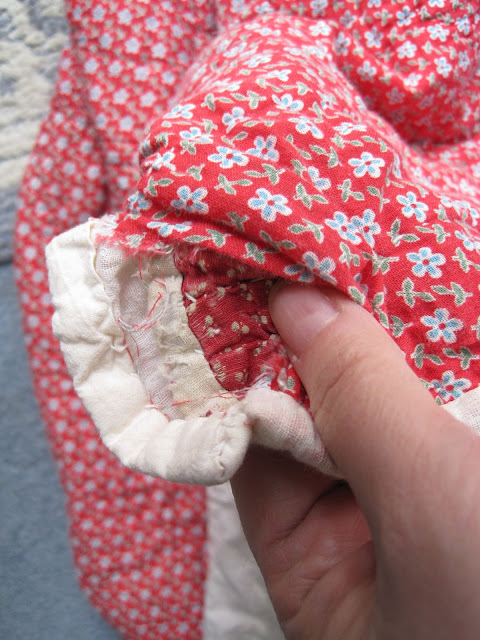 I held this quilt up to a window to reveal that an appliqued quilt was indeed sandwiched in between the layers. 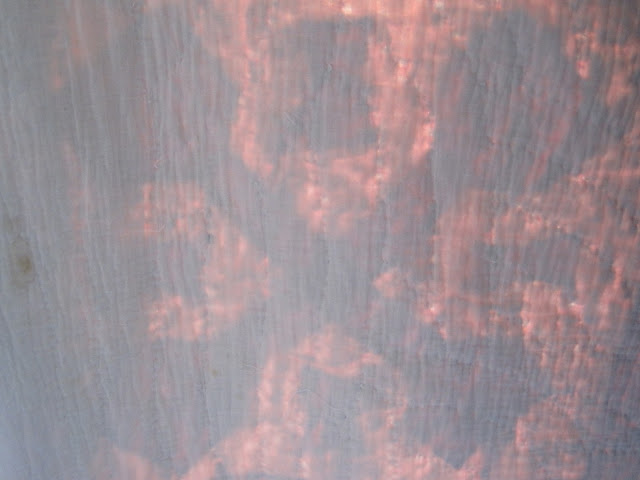 I knew that in hard times, old quilts, along with blankets and old clothes, were used for batting. It was a surprise to find I had just purchased just such a quilt.

The quilt maker used whatever she could afford. The first quilt shown would have been prized because she bought all new fabric to make a special quilt. But I prize this second quilt, because it speaks of her need: the need for warmth, the need to make do, the need for economy, and the need for beauty.
Posted by Nancy A. Bekofske at 4:59:00 PM No comments: