Expand Your Knowledge: Three Sheets to the Wind and How to Remove a Brain

I enjoy books which I can read in snippets in those spare moments during the day. Two recent such reads include Three Sheets to the Wind by Cynthia Barrett, which explains the many sayings that have come down to us from the age of sail, and How to Remove a Brain by David Haviland, a compendium of answers to questions about the human body. 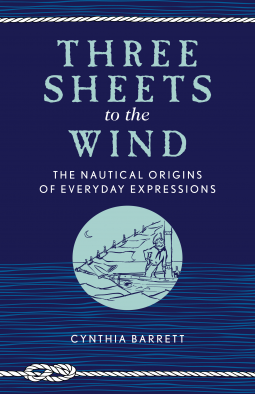 Three Sheets to the Wind: The Nautical Origins of Everyday Expressions by Cynthia Barrett was an entertaining read.

Cynthia Barrett comes from generations of seafaring men, her grandfather a whaler and her father a Navy man. In her attractive, illustrated volume she offers the entomology of phrases and terms that are rooted in maritime activities.

Presented in alphabetical order, each phrase includes an explanation of its origin and contemporary use, illustrated with excerpts from literature ranging from Homer to Melville to Patrick O'Brian.

I was a girl when I discovered Joan Lowell's pseudo-biography of a girl's life growing up on a sailing ship, Cradle of the Deep, and ever since I have enjoyed reading books about the age of sail, including the Nordoff and Hall Bounty books and Forester's Horatio Hornblower books. So, I was familiar with the original meanings of many of the terms, but others were a revelation.

When Archie Bunker called Edith a "dingbat" who knew a dingbat was slang for a deck mop made of used rope ends which would fly about uncontrollably while in use?

Speaking of old rope, the ends had to be repaired and spliced during times of calm, the sailors so employed being said to be "at loose ends."

I remember when blue jeans were called dungarees. Dungri is a Hindi word for cotton cloth. The first sailor's pants were made of old sails. Later, blue serge bell bottom pants were invented to make rolling up the pants legs easier for sailors employed at swapping the deck. When I was a teen bell bottom jeans were the rage.

A sailor from Belgium stowed his duds in a bag called a Duffle after the rough woolen cloth they used to make the sailor's clothing.

200 words and expressions are covered, and I am sure many will be surprised to learn the origin of sayings we still employ today.

I received a free ebook from the publisher in exchange for a fair and unbiased review.

Cynthia Barrett is a senior editor at Metro Books, an imprint of Sterling Publishing Company. She is an avid sailor and has a long family history near the sea. Her great grandfather, George Washington Barrett was a whaler out of Cold Spring Harbor, Long Island and as such he sailed around Cape Horn three times. In the Civil War he served as Commanding Officer of the USS Whitehead during the Battle of Albemarle Sound. Her father was a Lieutenant in the Navy and was in the D-Day invasion of France. She lives in New York City. 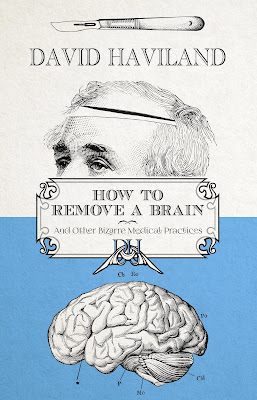 David Haviland's How to Remove a Brain and Other Bizarre Medical Practices is an entertaining read of wide-ranging trivia of the sort that I recall enjoying in junior high. Amusing as it reads, there is real information here that will engage all age groups.

For instance, Haviland addresses the mystery of Queen Victoria's undiagnosed hernia. The queen was rather obsessed over her state of health (and bowels) was very dependent on her personal physician, keeping him at her beck and call. She trusted Sir James Reid so deeply she requested that he secretly slip a lock of hair from her trusted friend John Brown into her hand before burial. Reid was never allowed to touch the queen, and until he inspected her corpse never knew she had a hernia, and from her nine pregnancies, a badly prolapsed uterus.

Something that Victorian writers didn't tell us about was those child chimney sweepers usually worked in the buff! The boys spent days around soot with no protection, resulting in 'soot warts', a form of cancer, but which was thought to be a sexually transmitted disease. Sadly, treatment meant the removal of the boy's scrotum. So when we now read about the boys who cleaned the chimneys, we have another understanding of the cruelness of child labor driven by poverty.

The book has been nominated for the People's Book Prize.

I received a free ebook from the publisher in exchange for a fair and unbiased review.

...a collection of strange and hilarious stories covering the entire history of medicine, from the bizarre practices of ancient societies (such as the Mesopotamian doctors who would diagnose a patient by inspecting the liver of a sacrificed sheep) to modern mysteries (such as the question of why pig farmers are more likely to have their appendix removed).

Email ThisBlogThis!Share to TwitterShare to FacebookShare to Pinterest
Labels: Cynthia Barrett, David Haviland, How to Remove a Brain, medical, The Nautical Origins of Everyday Expressions, Three Sheets to the Wind, trivia