Show and Tell Finds: an 1889 Sampler, a Children's Ecology Quilt, and Library Quilts

It's always interesting to see what the Clawson Quilting Sisters bring to Show-and-Tell sharing time! 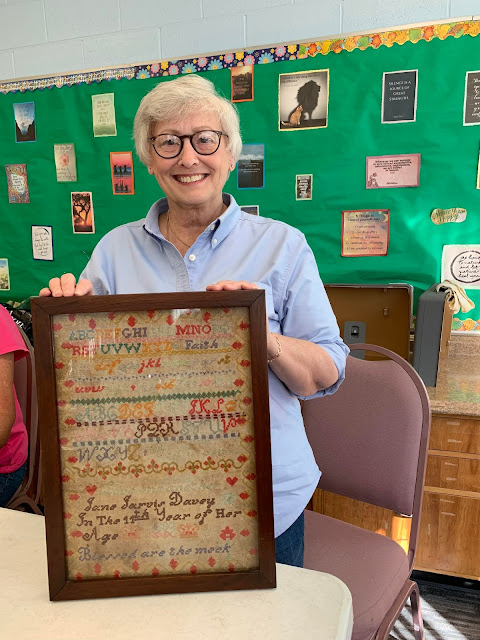 Sue Baker brought a family heirloom dating to 1889--a sampler made by her grandmother Jane Tesen "in her eleventh year." It is in the original frame made by her Grandfather Tesen. Sue says she has furniture he made in the same wood. 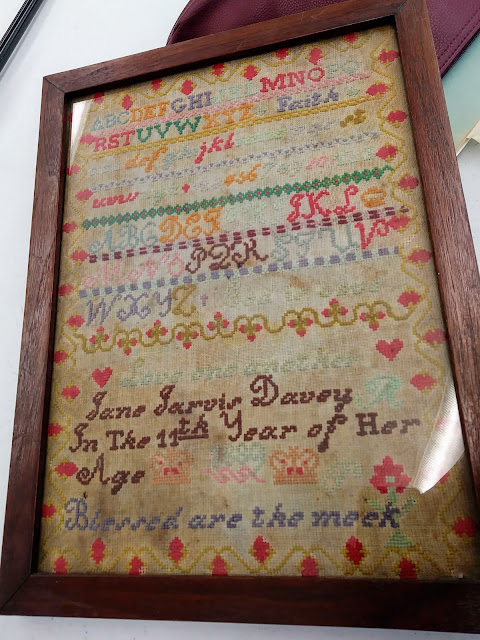 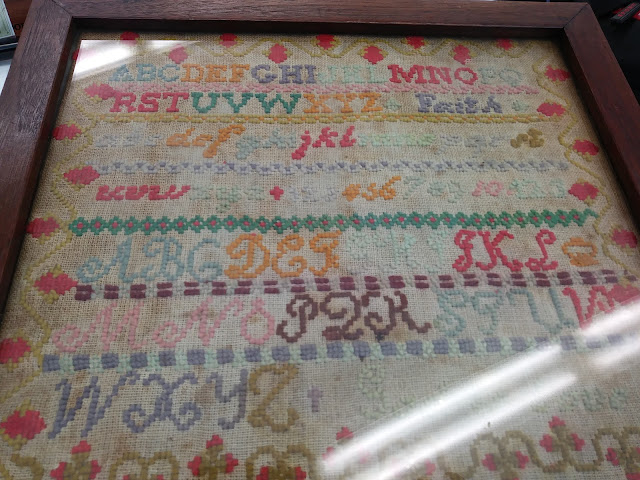 She was married three times and had two sons and three daughters. Jane died on July 24, 1956, in Detroit, Michigan, USA.

The 1900 US census in Franklin, Houghton, MI shows Josh worked as a copper miner. They later had children Harry and Betty. On December 12, 1905, Jane was granted an absolute divorce on the grounds of desertion. The 1910 US Federal Census for Dawson, MT shows Josh Ivey, 35 years old, working as a hired man on a ranch. It is likely this is Jane's husband as he was born in New Jersey to English-born parents!

On February 8, 1906, Jane married Arthur Geach in Ontonagon, MI. Jane was working as a domestic and Arthur was a miner. They had children John Lyne, Celeste Lillian, and William Arthur.

In 1920, Jane was living in Detroit where Arthur was a pipefitter in a factory, and in 1923 divorced him for 'non-support.' 1923 also saw the death of Jane's son Harry Ivey at age 21 in a mine accident. Harry and Arthur had gone to West Virginia to help start a mine. I expect the accident caused the divorce.

In 1924 Jane and Arthur remarried in Kanawa, West Virginia. I can't find their divorce. Arthur died in December 1942 of diabetes. He had been working for Ford as a machinist and lived in Dearborn, MI.

In 1926 Jane married Adolph Tesen in Kanawa, West Virginia. Adolph was a Norwegian immigrant who worked in the copper mines as a master carpenter. When a friend went to West Virginia to start a mine there he asked Adolph to be his carpenter. Jane did not care for W.V. She and her children returned to Detroit and the couple lived apart.

In 1930, Jane and Adolph were living with Jane's daughter Betty and her husband Francis Harrington. Also in the house was Betty's daughter Betty and two of her siblings, Celeste and William. Francis was a machinist in an auto plant, Betty sold hosiery, Celeste worked in advertising for a newspaper, and Adolph was unemployed. Adolph later returned to West Virginia while his Jane remained in Detroit. They remained separated.

A 1940 census shows Jane S. Tesen, age 61, married, and born in England, living in Detroit, MI. She had lived there for five years. She had an 8th grad education. She is listed as "mother-in-law." This is a mystery as the person next to her on the census does not appear to be someone from the family tree--Frank Valentine, age 61, was a debt collector for and an insurance company.

Sue told me how her grandmother had thirteen pregnancies and seven living children. One child contracted polio. One died of Diptheria and another choked on a collar button. Her son Harry was killed in a mine explosion.

It is so interesting to think about the life ahead of the eleven-year-old girl who stitched that sample in Cornwall, England. 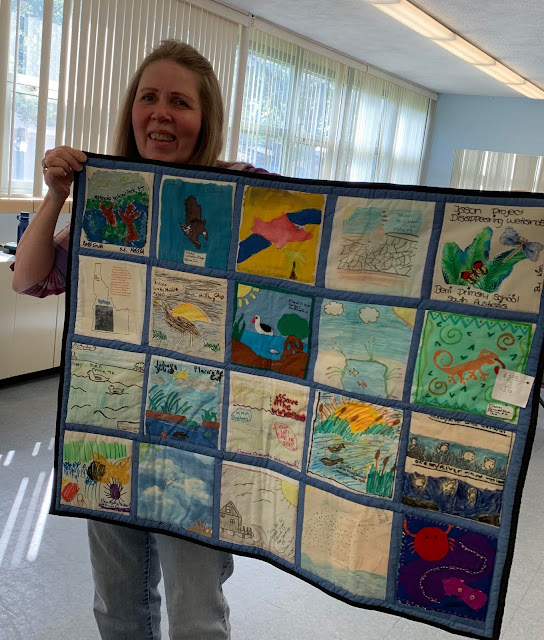 Tammy Porath shared a quilt she found for a few dollars. The blocks were all hand-painted or colored by children from across the world! Each block has an ecological theme. A block is dated 2005. 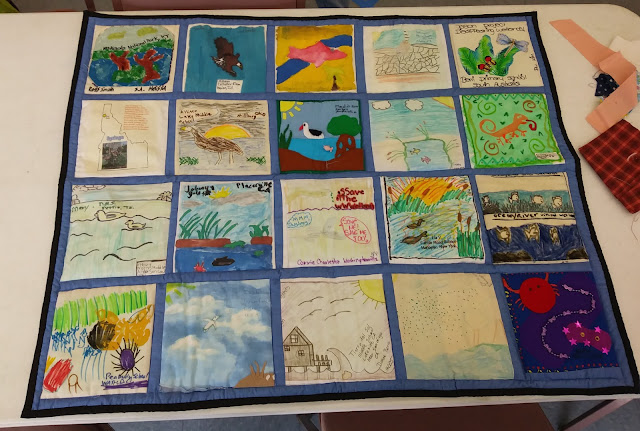 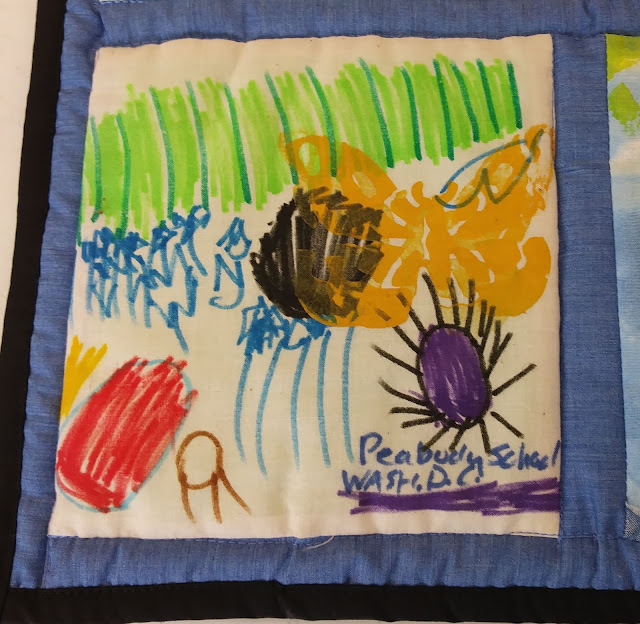 Peabody School, Wash. D.C. This elementary school is the early childhood campus of the Capitol Hill Cluster School with an arts integration focus. 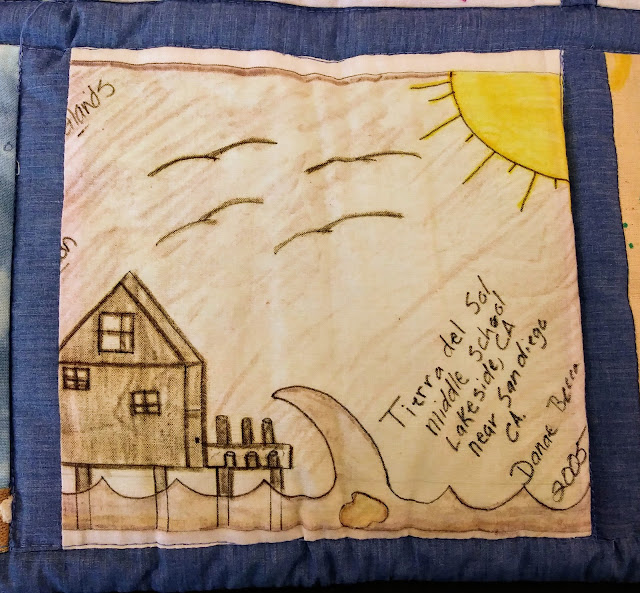 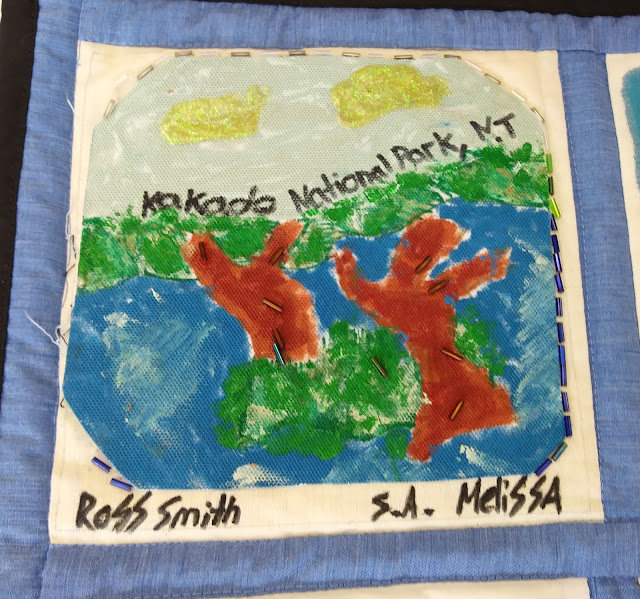 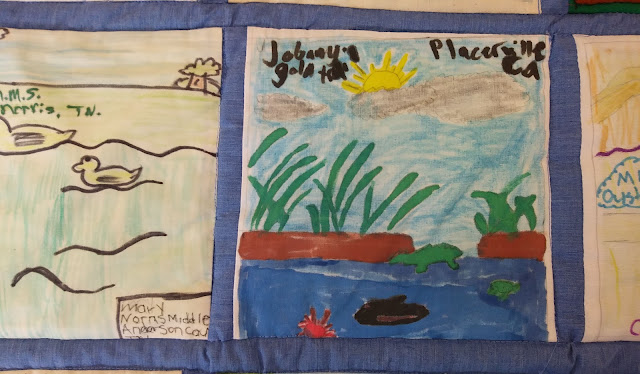 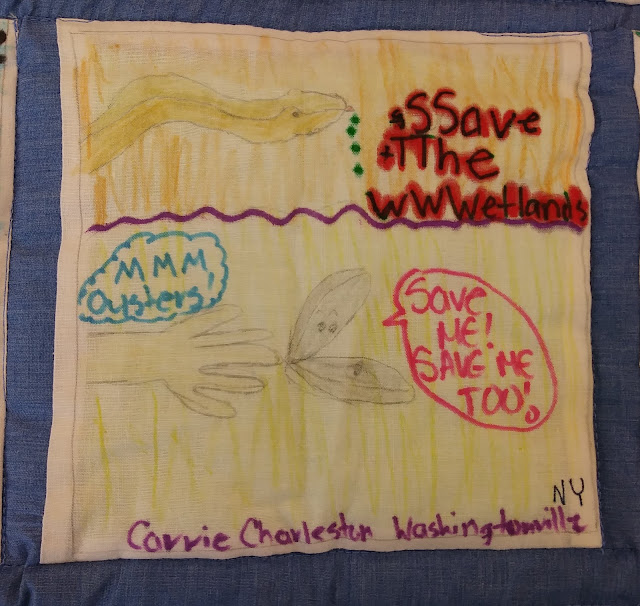 Save the Whales. The Oysters respond, Save me! Save me too!
Carrie Charleston, Washingtonville, NY 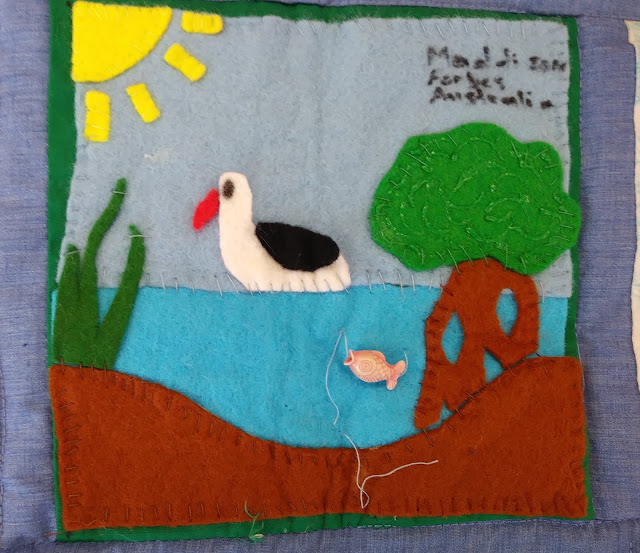 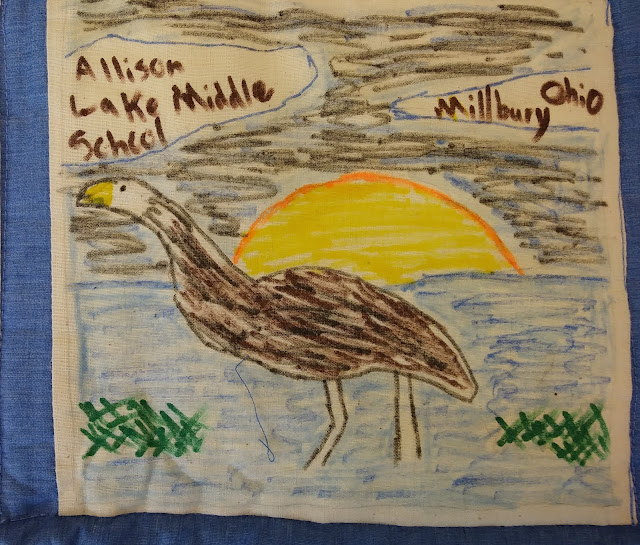 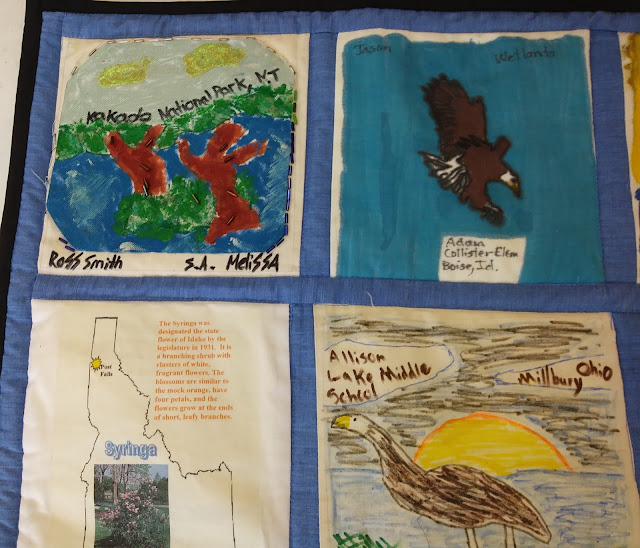 Miaya V. Hazeldale Ele., Sch., Aloha, OR; Jason Project Disappearing Wetlands, Berri Primary School, South Australia, by Kim. "Focusing on the diminishing marshes and swamps of the Louisiana bayou, "Disappearing Wetlands" utilizes NASA satellite imagery as it helps students better understand what wetlands are, why they are disappearing, and how to improve ecosystems management." 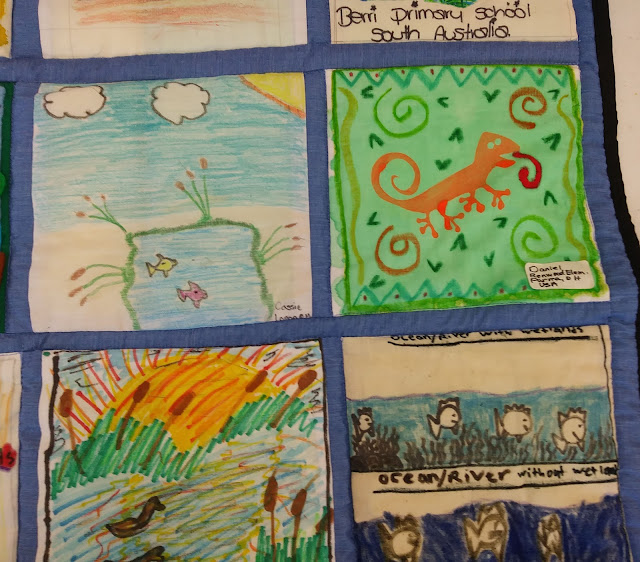 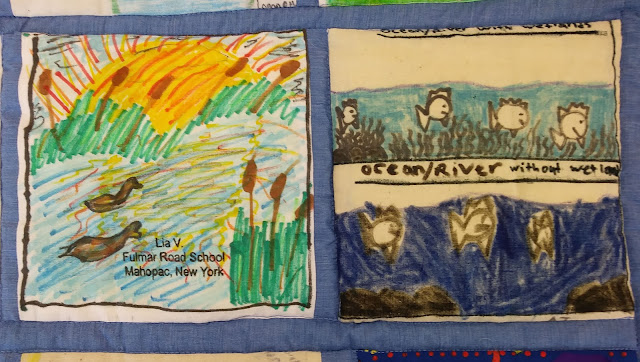 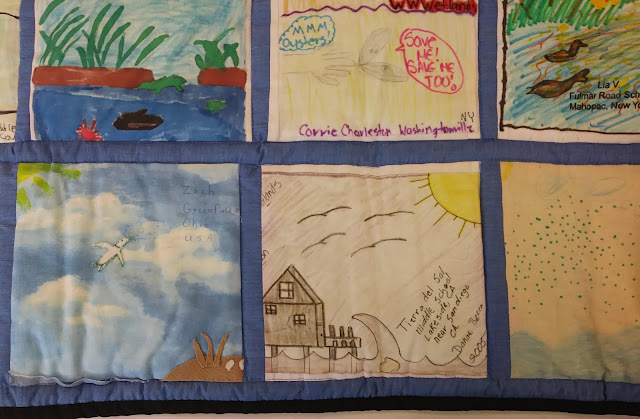 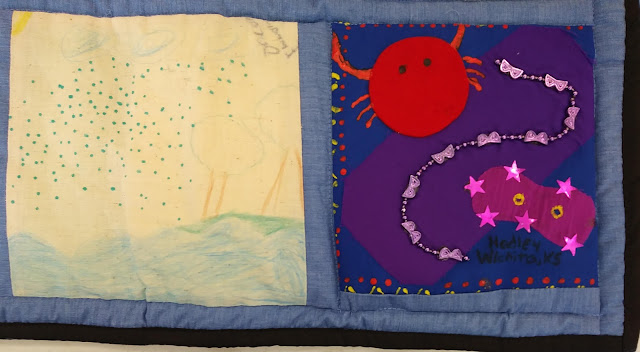 *****
Our local library monthly quilt show this month has taken over the display cabinet! Theresa Nielson's wool applique is hanging there! 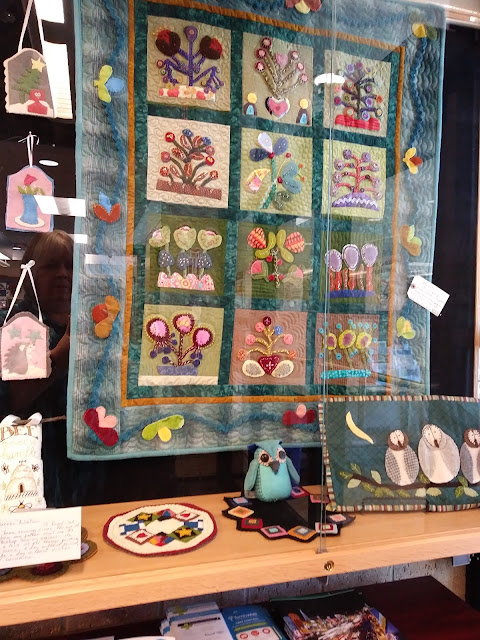 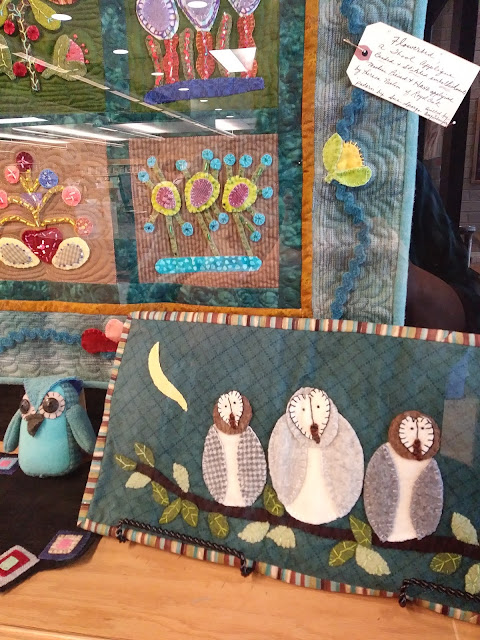 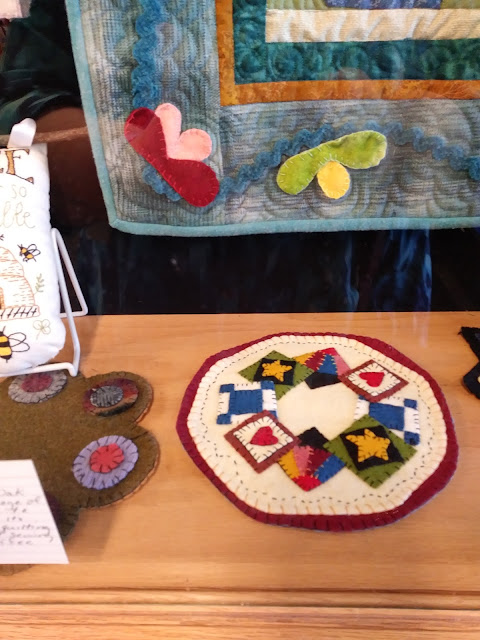 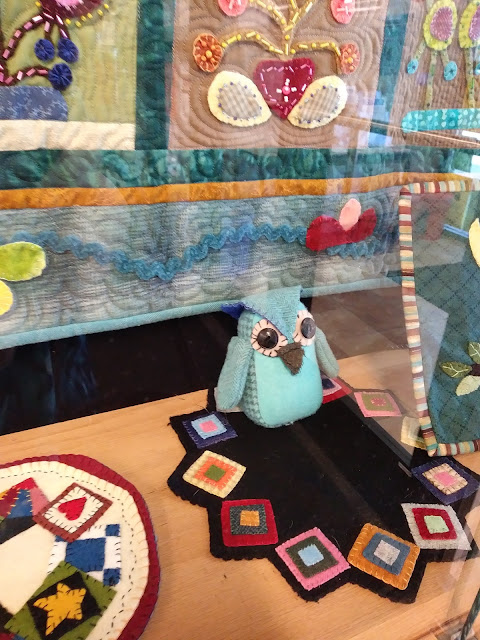 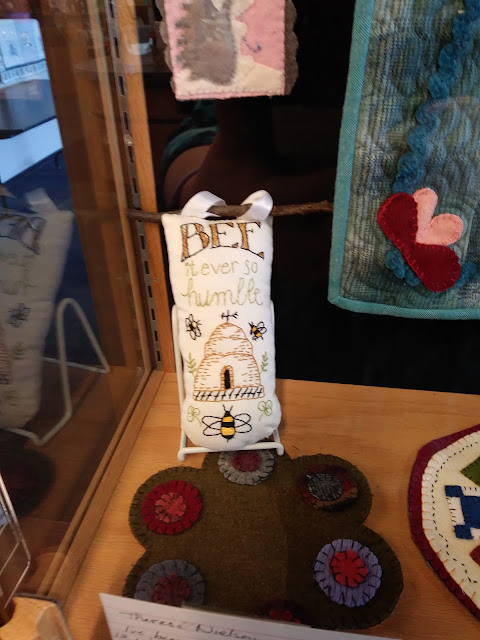 My wall hanging, below, uses vintage embroidery and a doily, beading, and my mother-in-law's counted cross stitch in the center.

Cathy Woodward teaches English; her quilt is For the Love of Books.

*****
My show-and-tell was my Winter Houses quilt, quilted and bound at last! 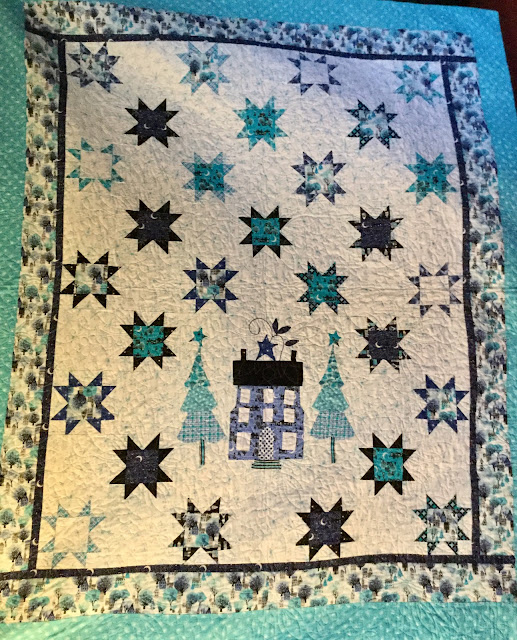