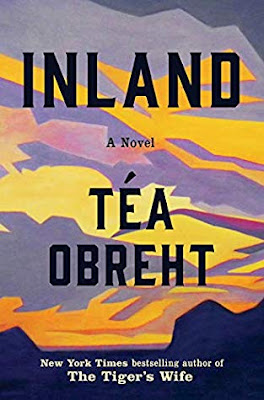 At the turn of the century, deep in the middle of the Arizona desert, Nora waits for her missing husband to return with water. Racked with thirst, Nora talks to her dead infant while tending to her vision-impaired son and her husband's superstitious niece. Two older sons are getting into trouble instead of running their dad's newspaper.

At the same time, a haunted immigrant Muslim 'Turk' and his comrade camel recall their many adventures with the army and running from the law.

This wild and original idea for a Western tale delves into new territory filled with desert and thirst, lawmen and murder, secret desires and secret liaisons, ghosts, and alien monsters.

Obreht is a masterful stylist and Inland is brimming with quotable lines from descriptive to insightful.

Stowaway burrs dimpled her hem. ~from Inland by Tea Obreht


The longer I live, Burke, the more I have come to understand that extraordinary people are eroded by their worries while the useless are carried ever forward by their delusions.~from Inland by Tea Obreht


Life's happiness is always a famine, and what little we find interest nobody. What use is it, the happiness of some stranger? At worst, it driver onlookers to envy; at best, it bored them. ~from Inland by Tea Obreht


Where did Obreht come up with the idea behind this unusual story? History.
Obreht was inspired by real people and events. The U.S. Army did have a plan to employ camels and camel drivers, feral camels did roam the west after the plan fell through. Hi Jolly in the novel was one of the camel drivers.

What a masterful handling of material and plotting! What gorgeous prose!

I won a copy of the book on LibraryThing. My review is fair and unbiased.
Posted by Nancy A. Bekofske at 3:30:00 AM