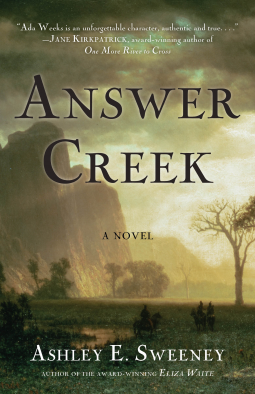 Ashley E. Sweeney recreates a cross-continental journey that makes social distancing and being in lock-down at home feel luxurious. Answer Creek is about endurance and survival.

Set in 1846-7 on the California-Oregon trail, the novel tells the story of Ada who travels across the continent with the Donner-Reed party.

After the tragic death of Ada's parents, she was taken in by a Norwegian family who decide to move to California. Early in their journey, they impulsively drive their wagon into high water and are lost. Ada is next taken in by the Breen family.


Dyin's gonna get us all in the end, one way or t'other, she thinks. But dyin's not the hardest part. Livin's a lot harder than dyin' any day. ~from Answer Creek by Ashley E. Sweeney

Ada, one of the few fictional characters in the novel, has endured a lifetime of troubles over her brief nineteen years. As hardened as she is, she also has a tender heart, caring for children and women and giving medical care to the men.

The tale can rival any story of hardship I have read, from Polar explorers to concentration camps.

Staying home for two months? Running out of toilet paper, milk, and eggs?

This is nothing compared to living 124 days in an overcrowded cabin, buried in snow, starving, without heat or blankets or decent clothing.

Ada survives, but what kind of life can she have, linked as she is to the cannibalism of the Donner party? Luckily, a man named Riddle takes her to Answer Creek where she can heal and find a new life.


Sometimes, it's all we can do to hold it together, she thinks. And over and through it all, we've got to forgive ourselves, and others, over and over and over again. ~from Answer Creek by Ashley E. Sweeney

I was swept into the novel by the beautiful, descriptive writing. Ada is a strong, appealing character who is easy to relate to. The novel gains momentum, from the early beauty of the plains and the impressive natural formations of the West to the privations and life-threatening brutality of mountain winter. It was a joy to read.

I received a free ebook through NetGalley in exchange for a fair and unbiased review.


From the award-winning author of Eliza Waite comes a gripping tale of adventure and survival based on the true story of the ill-fated Donner Party on their 2,200-mile trek on the Oregon–California Trail from 1846 to ’47.

Nineteen-year-old Ada Weeks confronts danger and calamity along the hazard-filled journey to California. After a fateful decision that delays the overlanders more than a month, she—along with eighty-one other members of the Donner Party—finds herself stranded at Truckee Lake on the eastern side of the Sierra Nevada Mountains, stuck there for the entirety of a despairing, blizzard-filled winter. Forced to eat shoe leather and blankets to survive, will Ada be able to battle the elements—and her own demons—as she envisions a new life in California?

Researched with impeccable detail and filled with imagery as wide as the western prairie, Answer Creek blends history and hearsay in an unforgettable story of challenging the limits of human endurance and experiencing the triumphant power of love.


Ashley E. Sweeney is the winner of the 2017 Nancy Pearl Book Award for her debut novel, Eliza Waite. Her much anticipated second novel, Answer Creek, will be released in May 2020.

Ashley is a seasoned journalist, teacher, and community activist. She served as a VISTA volunteer in the late 1970s and continues community service today as a member of Soroptimist International, one of the largest women’s advocacy organizations in the world.

Early in her career, Ashley found an outlet as a humor columnist and features editor for The Lynden Tribune in Lynden, Washington, where she garnered numerous awards for her writing. She has taught English, Journalism, English as Second Language, and GED prep at both the high school and community college levels.

A native New Yorker, Ashley is a graduate of Wheaton College in Norton, Mass., the Stanford Publishing Course, and City University in Seattle, Wash., where she earned a Masters of Education degree.
Ashley spends her time between La Conner, Washington and Tucson, Arizona with her husband D. Michael Barclay.