Labyrinth of Ice: The Triumphant and Tragic Greely Polar Expedition by Buddy Levy 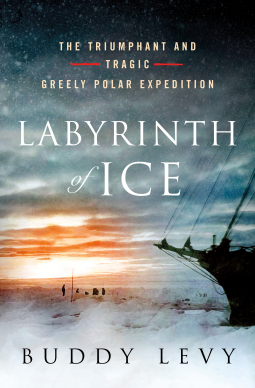 In 1881, American Lt. A. W. Greely and a team of scientists went on a journey to pass the record of reaching furthest North. Buddy Levy's new book Labyrinth of Ice takes readers on their journey of glory and horror. The men accomplished their mission of reaching furthest North and contributing important scientific data. They were also stranded over two winters with dwindling supplies.

Anyone who knows me or follows my book reviews will know that I am a life-long fan of Polar expedition literature. It started with reading The Great White South by Herbert Ponting when I was eleven years old. I read and reread the tattered, discarded library book  about the failed Scott Expedition to the South Pole. Scott and his team were such romantic, tragic heroes.

In recent years I have enjoyed the opportunity to continue reading outstanding books sharing the tales of Arctic and Antarctic expeditions, an armchair adventurer. Before the astronauts and space exploration, men of courage and vision took on the vast frozen spaces of ice, seeking fame, glory, short-cut passages, and scientific knowledge. They were the heroes of their day.

Labyrinth of Ice was a bone-chilling read. I felt I knew these men and suffered with them. The bravery and selflessness of some were offset by a self-seeking thief. Madness and despair were found alongside clear-thinking and innovative thinkers. When their supply and rescue ships failed to arrive, Greely struggled to keep the team disciplined, in good spirits--and alive as they suffered life-threatening conditions and starvation. Lady Greely, extremely self-educated in Arctic literature, pressured the government to send out rescue ships.

Eleven men had died before they were finally found. Public opinion turned from adulation to revulsion when rumors of cannibalism circulated the newspapers. The survivors went on to illustrious careers.

I was given access to a free ebook by the publisher through NetGalley. My review is fair and unbiased.