The Winter Army by Maurice Isserman: The WWII Odyssey of the 10th Mountain Division 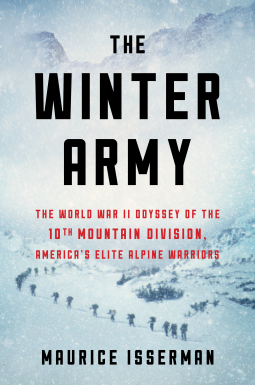 Over twenty years ago I met Floyd Erickson, born in the Upper Penninsula Michigan. During WWII Floyd served in the 10th Mountain Division. His life-altering experience under fire on Mt. Belvedere was legendary; everyone knew of his bargain with God which led to his becoming a well-beloved patriarch of the church.

I recall how Floyd, still trim, proudly donned his uniform to join his fellow soldiers at a reunion. And the stories his wife Elizabeth told of how Floyd supported his large U.P. family and the alteration in his character when he returned from war.

Maurice Isserman quotes Floyd in his history of the 10th Mountain Division, The Winter Army, in the chapter concerning the Allied invasion of Kiska. After months of training in extreme conditions, the Army was uncertain of what to do with this 'winter army' of men trained for mountain snow and ice. Their first deployment was to oust the Japanese from Kiska in the Aleutian archipelago.

"It was a terrible night, that first one," Floyd said, recalling the twelve-hour ascent carrying his gear and machine gun ammunition, then digging a foxhole in the pouring rain. The Americans did not know that the Japanese army had already abandoned Kiska. Nineteen mountain troopers died from 'friendly fire'. It was a demoralizing blow.

Isserman narrates the history of this legendary division with details drawn from oral histories that bring the story to life.

Toward the end of the war, the 10th Mountain was sent to the Italian Alps. They were there to keep the German army busy. Climbing the iced mountains, crossing the open Po Valley the Po River, and the final battle was horrific.

Floyd saw his best friend killed in action and suffered permanent hearing loss from a blast.

After the war, these men impacted the ski industry. One became the first executive director of the Sierra Club; another co-found The Village Voice. One co-founded Nike; another became a renowned historian. And there was Bob Dole, US senator, and presidential candidate.

And there were men like Floyd, an ardent skier from a small town with a large impoverished family, a good man whose life was dedicated to his family and church and community.

I was given access to a free book by the publisher through NetGalley. My review is fair and unbiased.