"America 1844: Religious Fervor, Westward Expansion and the Presidential Election that Transformed the Nation" by John Bicknell

What if Texas had not been annexed into the United States? What if California, Oregon, and the Pacific coast were a separate country? What if Henry Clay had won the 1844 presidential election and western expansion had come to a standstill? 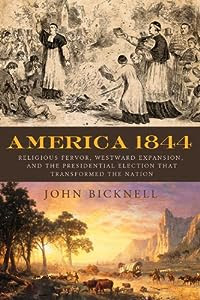 The premise of  Bicknell's America 1844 is that the future of America was determined by the events of this pivotal
presidential election. year.

The most important political topic of the time was the annexation of Texas, a cause supported by President John Tyler. His arch nemesis was Henry Clay who feared that the annexation of Texas would shift political power in favor of the southern slave states. Clay also did not buy into the mandate that America must claim the continent all the way to the Pacific Ocean. John Polk was the Democrat choice, a slave holder from Kentucky who ardently believed that the whole of North American must become unified into the United States of America and who also wanted the annexation of Texas. Throw in Joseph Smith, the founder of the Mormon church running for election and you have a very interesting presidential race.

For ten years there had been a 'gag' rule that had tabled the issue of Texas. John Quincy Adams had gone into congress after his presidency, and as an ardent abolitionist he was against bringing Texas into the union. At the end of the year Adams successfully lifted the gag rule and the vote was cast.

Meantime, regardless of wether the land was American or not, people were immigrating across the continent to California and Oregon. In 1844 the trails were still being forged, often by people ignorant of the land-- and basic survival skills. Bicknell is at his best in describing the harrowing journey of several parties. And he tells the story of  John C. Fremont, the little remembered explorer of the Rocky Mountains and Pacific Northwest who was quite a character himself.

The Second Great Awakening brought new forms of religion. George Miller studied scripture and determined that 1844 would be the time of the second coming of Christ. Millerism spread across the country, with people selling or giving away everything they owned in preparation. Miller believed that God played a hand in human history, in contrast to the deistic beliefs of the Founding Father's time. The abolitionist Angelina Grimke' was a follower of Miller. The date of the end time came and went--several times-- but that did not deter Millerites from hoping it was still coming. Some later decided that the Second Coming of Jesus was his return to heaven and not an earthly reality.

The Mormons were undergoing continued persecution, suffering total loss of their possessions and land while authorities turned a blind eye to the crimes. It is appalling to know that the law would not protect the rights of this church group. Smith's platform was progressive, calling for prison reform and gradual, compensated emancipation. He was jailed and lynched, which ended his campaign and left Brigham Young to claim power.

Millerites hoped to escape the world and figured God would release the slave at the end time. So there was not need to think of worldly matters. Joseph Smith looked to fix societal problems. Social activism was born in the Second Great Awakening and lead to the Social Gospel of the early 20th century.

I was very interested in the thorough presentation of the Anti-Catholic riots by Nativists in Kensington and Southwark  neighborhoods now  part of Philadelphia, Pennsylvania. The Protestant Bible was used in public schools, and the Irish Catholics wanted to use the Catholic version. Nativists built a platform in front of St. Michael's Church in protest. They also called to mandate a 21 year residency for voting rights and the blocking of non-naturalized citizens from holding political office. Riots ensued. We lived in Kensington for some time.

Millerism, Mormons, Catholics vs. Protestants was not the only religious news of the day. Transcendentalist Henry David Thoreau translated a Buddhist text from the French and became a practicing Buddhist, introducing the religion to Americans. And it was the year that Robert Chambers beat Darwin to publishing the first paper on evolutionary theory. Not to mention that the issue of slavery was splitting mainstream denominations.

Thank you to Chicago Review Press and NetGalley for allowing me to read the pre-release e-book.