Mother of the Brontes: When Maria Met Patrick by Sharon Wright 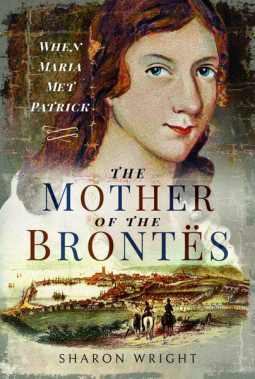 If you knew what were my feelings whilst writing this you would pity me. I wish to write the truth and give you satisfaction, yet fear to go too far, and exceed the bounds of propriety. Maria Branwell to The Rev. Patrick Bronte, August 26, 1812

When I consider my previously perceived character portrait of the Rev. Patrick Bronte, the man who drove his daughter Charlotte's suitor away, it is a revelation to see the young Patrick through the eyes of Maria Branwell, who became his wife and over nine years birthed six children with him. Theirs was a love story based on mutual ideals and values, a shared love of books, and, yes, physical attraction.

Unless my love for you were very great how could I so contentedly give up my home and all my friends--a home I loved so much that I have often thought nothing could bribe me to renounce it for any great length of time together, and friends with whom I have been so long accustomed to share all the vicissitudes of joy and sorrow? Yet these have lost their weight..." Maria Branwell to the Rev. Patrick Bronte, October 21, 1812

"My Brontes are not the famous ones, Sharon Wright begins, "Mine are the 'before they were famous' ones, Miss Branwell and Pat Prunty...the Bronte backstory, I suppose. The prequel."

And what a prequel story it is! In Mother of the Brontes we learn about Maria's Cornwall roots in Penzance with its busy port, thriving trade, and restless sea. The Branwells (or Brambles, Bremells, Brembels, Bremhalls, Brymmells, Brembles, Bromewells or Brummoles) clan had deep Penzance roots with masons and export/importers. On her mother's side, the Carnes also had deep Cornwall roots, with masons, craftsmen, and merchants.

Maria grew up in comfort and society. The Branwells were Methodys, and when Maria was six she meet John Wesley when he visited her mother's cousin, known as the father of Cornish Methodism. Her Aunt Jane Branwell married the Methodist preacher John Kingston. Later, they founded the first school for itinerant Methodist preacher's children.

And yet, Maria's merchant father was involved with the Penzance underground of smugglers! He refused revenue men entry and did business with "two of the town's busiest tax dodgers" and smugglers.

Maria was under 5 feet tall, as was her daughter Charlotte, always dressed in simple good taste. She was an avid reader enjoying poetry, Christian books, and The Lady's Magazine with its racy women's fiction. Maria enjoyed the Gothic romances so popular in her day. Her father was a violinist and Maria inherited her musical talent (later passed on to her daughters, particularly Emily).

When Maria was ten, France declared war on Britain and Cornwall sprang into defensive mode. Her brother joined the Home Guard. But it was domestic trouble they had to address when starving miners marched into town. Later, the French Wars became the Napoleonic Wars.

The supernatural also flourished in Cornwall. It was an exciting blend of "ghosts and smugglers, legends and liturgy, tea parties and revivals," Wright remarks.

After the deaths of their parents, Maria and her sisters lived together with a decent shared income.  She joined the Ladies Book Club whose selections included Jane Austen's Sense and Sensibility.

When Aunt Jane and her husband's school for Methodist itinerant preacher's sons had grown to 60 boys, Maria was called upon to come and help keep the children clothed; Jane couldn't keep up with the mending.

And leaving her beloved home, Maria met the Rev. Patrick Bronte, the Irishman who won scholarships that took him from his family farm. He reinvented himself from Pat Prunty to Patrick Bronte. He knew Lord Palmerston from school and William Wilberforce helped him gain a scholarship for his ecclesiastical training.

The couple shared a love of books and an Evangelical bent. Their marriage was happy and they quickly had nine children, including the famous daughters.

Maria Branwell Bronte died at age 38. Her sister Elizabeth unwillingly left her home to take her sister's place in the household and ended up staying for the rest of her life.

Before Patrick's death, he had tragically lost every one of his children and was cared for by the son-in-law who he had once rejected as Charlotte's suitor.

This short biography shows Maria's legacy in her remarkable family, her literary aspirations, Evangelistic faith, and deep love for Patrick Bronte and their children.

Reading Mother of the Brontes brought images of Cornwall gleaned from Poldark and Daphne Du Maurier. Maria and Patrick made me think of John and Abigail Adams, a marriage of equals based on both shared intellectual ideals and physical attraction. The surviving letters and an essay by Rev. Bronte are included.

I enjoyed this engaging portrait of the Mother of the Brontes and it added to my understanding of this remarkable family.

I received an egalley from the publisher through NetGalley in exchange for a fair and unbiased review.

As I was reading Mother of the Brontes I was also finishing my Bronte Sisters quilt! I have been making small quilts to celebrate favorite writers. It is based on the portrait by Branwell Bronte. I wanted to show the rich inner life of these women and the Jane Sassaman fabric used in the background was perfect, showing the lush richness of natural beauty, the hidden spiders and spider webs a nod to the life's dangers.