The Fourteenth of September by Rita Dragonette 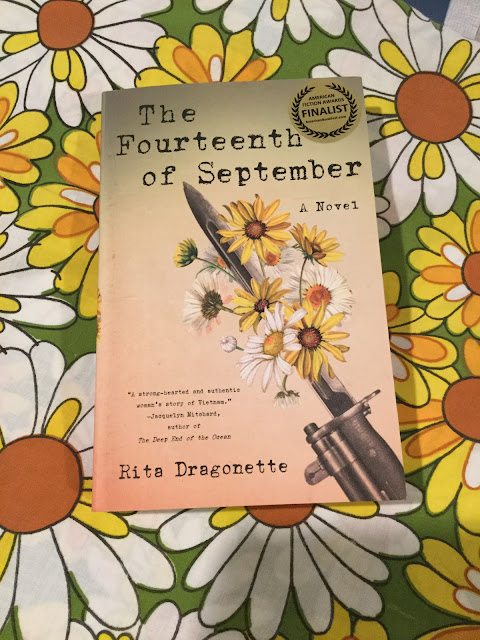 The Fourteenth of September by Rita Dragonette is rooted in Dragonette's personal experience in 1969 and 1970 when daily body counts from Vietnam and the looming Draft Lottery was met by youth anti-war protests, culminating in the horror of the Kent State massacre.

The protagonist is a young woman on a WRAIN scholarship to become an army nurse, her meal ticket out of her dead-end town. But Judy decides she must understand the war and her values first by becoming involved with the campus Freaks in the anti-war movement.

For Boomers like me, the novel covers familiar territory, rife with personal associations, from the long hair and the rock music to the political and social events.

The approach is fresh--the story of a young woman grappling with her future, her attitude toward the Vietnam War, pushing herself to determine what she believes.
I got Judy's motivation.

In 1969 as a high school junior, I wrote anti-war poetry for the school paper but dated a boy in the Civil Air Patrol, the armed service in his future. He needed the structure and discipline CAP offered him, his home life dysfunctional.
In 1970 at a small college campus divided into Greeks, Freaks, and GDIs (God Damed Independents) I found myself friends with a Freak with long hair and long fringed coats, kids who smoked pot, clean-cut Vietnam Vets returned to finish their education, long-haired Vietnam Viets with jaded stories, Sorority girls, and everyone in between. I wanted to know all kinds of people, to be nonjudgmental, but stay true to my values.

But Judy was grappling with more than me; I knew I would not be drafted, while I knew the boys were worried. I felt guilty. But I was 'safe.'

The post-war generation was not the first or the last to question the judgment and decisions of those in authority. Each generation must find their moral compass, and chose how to respond. Today's young heroes stand up for gun control and women's rights and inclusion.

I asked Dragonette questions about her motivation for writing the novel, if it was cathartic to have written the events in fiction, and how her story relates to the current youth-led protests.

I lived through many of the incidents of the time period and, probably because I was always the participant-observer writer, I knew that there were things that happened that absolutely had to be recorded and remembered. I waited years to see if they would be by other novelists, but no.

I had a friend (he's on my acknowledgments page) who sent me a letter after graduation telling me that there was a story to be told and I was the one to tell it.  Well, if you tell someone like me--who is ridiculously responsible something like THAT---it's quite the monkey on your back.

I've always been very interested in the role of women in war. My mother was a nurse in WWII who did really amazing things (i.e. she was in Patton's Army doing meatball surgery on the front in a tent, helping to liberate Stalag 11 in Germany) and saw far more action than my father, but was undervalued because she was "only a nurse," versus my father whose life was on the line.

When I heard the stories they didn't make sense. I had two parents, both of whom were doing something equally patriotic, important, and dangerous, and it didn't seem logical to value their specific experiences differently.

When it came to the war of my generation I saw the same issues--[women told that] you can't possibly understand what we men are going through-- and I wanted to present a case to make it clear that we are in wars as a generation, a country---not as a gender.

I wanted to pose a female dilemma that was every bit as fraught and intense as the decision that had to be faced by the men of the time (1969-70).

There are two articles in the Featured Articles section of the Media tab in my web site that also talk about this at www.ritadragonette.com. Specifically, there is a highly-fictionalized version of an actual incident in the book where a vet is dissed in an anti-war meeting. I remember that, and how I felt that someone needed to stop it but it couldn't be me because I was a girl and no one would listen to me. It was the only time in my life I ever felt like a coward---and yes, writing about it--and the whole book--was cathartic--did help me understand it better as an adult and dissect the impulse.  I never let myself feel that way again.

I think we write--which is arduous  and why would we choose to do that?--because we have stories that must be told to bear witness, to instruct. When we write we share our personal experience and point of view on an issue we feel is significant and not yet explored.

It's not therapy (though I'm sure that helps), but it gives value to experience and feelings. I feel that we learn our history from facts and nonfiction but we understand it through narrative.

My story is based on some of the things that happened in my life and some of it was easier to write about than other parts. The mother scenes were excruciating. She wasn't exactly my mother, but any time you write about a parent real life comes through. I still cry over the fate of certain characters--one was real and another was made up whole-cloth.

I also don't feel this time in history has been sufficiently covered. Vietnam is the Voldemort of wars--we feel bad because we lost, there were atrocities, we treated our vets badly. So we don't teach or talk about it. But there are important lessons to be learned.

Thank God for the time frame (it's been 50 years), Ken Burns, and the availability of unclassified information. Now we can look at it dispassionately, more like WWII.

I'm glad that part of the legacy of Vietnam is that we've been extra cautious about getting involved in other conflicts (not totally, but we don't rush in to save the world) and so far there has never been a draft; we've learned that we owe vets the world, etc.

WRAIN was like ROTC but I'm not sure the guys had to enlist before graduation; WRAIN members did. They were told it was an unbreakable commitment unless they got pregnant. Part of the absurdity is that you see it really wasn't. Later I found out more than a few guys got out of ROTC. I also learned that you could get out of WRAIN if you just told them you didn't want to be a nurse--they didn't want to be shafted for all that tuition without payback. Lots of Catch 22 stuff still goes on in the military but Judy took it seriously, her dilemma is dead serious--she believed more than they did. Just like the war. Just like young people do and should. What's the parallel?  Guys were drafted and went because they were told they had too. Yet many bought their way out...

See my MS. magazine story (click here to read) about how the activists of my time were similar to the Parkland kids. It says it all. Social media beats the streets. Our issue was the war--there was death (no draft means no marches), and civil rights, early feminism. I love how [today's young adults] care about climate change (we could barely get Earth Day going in l970), LGBT, etc. As far as women's rights--it's an ongoing battle. We should go to war over men trying to control women's bodies--we are re-litigating issues settled long ago. It's the hamster wheel of history. We need to go forward not backward.

Progress is hard-won but fragile. If that's true, we are doomed to the hamster wheel of history and we're capable of more than that. We can STILL change the world.

*****
The novel has won six awards including the National Indie Excellence Award for new fiction and book cover design.

Visit Dragonette's website to learn more about The Fourteenth of September. You will find excerpts, the song playlist, the trailer, an more.

I received a free book through a giveaway on the Facebook group American Historical Novels. My review is unbiased.

*****
Further Reading:
Read my review of 67 Shots: Kent State and the End of American Innocence
by Howard Means here
The Given World by Maria Palaia tells about a woman whose brother is MIA in Vietnam, my review here
Posted by Nancy A. Bekofske at 2:30:00 AM

This was very interesting. I was a year behind you in school in Livonia, MI. There wasn't much in the way of anti-war sentiment in our suburban high school, although we all knew the guys' draft numbers. But I went on to the University of Michigan, and that was a different story! I'll have to put this one on my list.