The Rest of the Story by Sarah Dessen 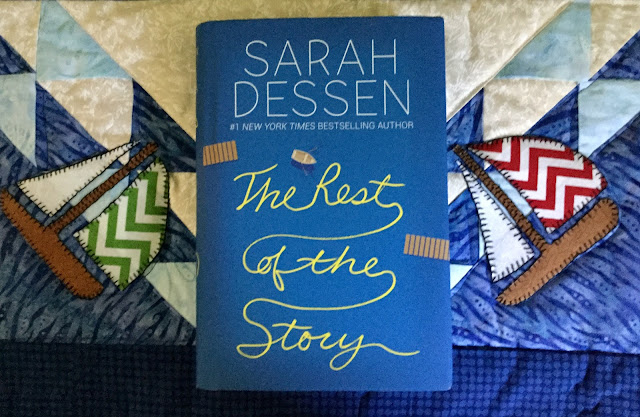 In Michigan, one is never more than 6 miles from a lake or 85 miles from one of the Great Lakes. It's the Water Wonderland--the Great Lakes State. When we go on vacation, we go to the lake. We have cabins and we rent cabins. We go camping, we stay at a resort. But there is usually water involved.
Once when we were camping along Lake Michigan, I went into town to see the 'tourist trap' stores. I remarked to a teen working at the marina, "what a beautiful place to live!" I got a scowl.

About ten years later my husband's work took us to that small resort town. And I understood. There were usually under 250 students in the entire K-12 school, the town closed down at the end of August, and the locals were much poorer than the summer folk at the marina and the summer 'cottagers'. They worked hard four months of the year when the rich came to play.


How could someone know you better than you knew yourself? Especially if they really didn't know you, not at all? from The End of the Story by Sarah Dessen

The Rest of the Story by Sarah Dessen takes place on one lake with two communities: the upscale tourist resort Lake North and the working class North Lake with its ramshackle cabins.

Emma Saylor's mom came from North Lake; her dad was a summer sailing instructor at Lake North. Their marriage ended in divorce, and then Emma's mother died. Emma's father doesn't talk about her mother's roots.

Circumstances bring Emma to stay with her maternal grandmother in North Lake for three weeks during the summer. Her grandmother and cousins are strangers to Emma. But the Calvanders know all about her--Saylor.

Over the summer, Emma becomes Saylor, learning her mother's history, growing to love her mother's family, and taking the risks she has avoided all her life. You can make your life, or life can make you, she learns.

This was a nice summer read with great characters and lake ambiance while touching on deeper themes of class, anxiety issues, alcoholism, identity, and self-determination. Plus, there is a touch of romance. The hard-working, hard-partying teenager world is well developed, and a crisis brings a happy ending.

I won a copy of the book in a giveaway on The Quivering Pen run by David Abrams, author of Fobbit and Brave Deeds. My review is fair and unbiased.

Email ThisBlogThis!Share to TwitterShare to FacebookShare to Pinterest
Labels: coming of age, Sarah Dessen, The Rest of the Story, YA fiction